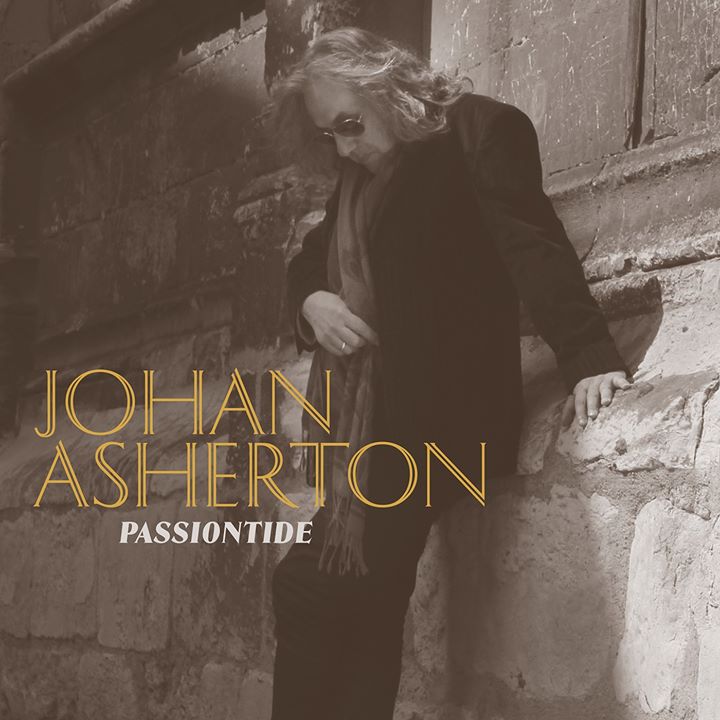 ‘Passiontide’ by Johan Asherton contains ten brand new original compositions, skilfully crafted and beautifully played for your listening pleasure. It is Johan’s first solo studio album since 2012’s folk-inspired ‘The House Of Many Doors’. In many ways ‘Passiontide’ follows on from his well-received 2015 group project, ‘Johan Asherton’s Diamonds’, which offered a sophisticated glimpse into the contemporary Parisian rock and pop scene. Compositions like ‘Nightfall’, the first single from Passiontide, could have easily sat in with the songs from the Diamonds project too.

The musicians that Johan has chosen to work with this time hail from the Normandy music scene. They include his long-term collaborator Stéphane Dambry (The High Lonesomes) and a “new face”, Gene Clarksville, who, along with Dambry, helped to record and produce the album at The Barn and La Grotte studios, Normandy. The standard of musicianship throughout the album is impeccable, as we have come to expect from L’Asherton and friends. Sarah Barnwell, (previously heard on the ‘The House Of Many Doors’), returns to add flourishes of violin to several songs. The backing vocals by Bénédicte Fleutry and Eva Dambry-Royou are beautifully placed, a light feminine foil for Johan’s rich basso profundo tones. 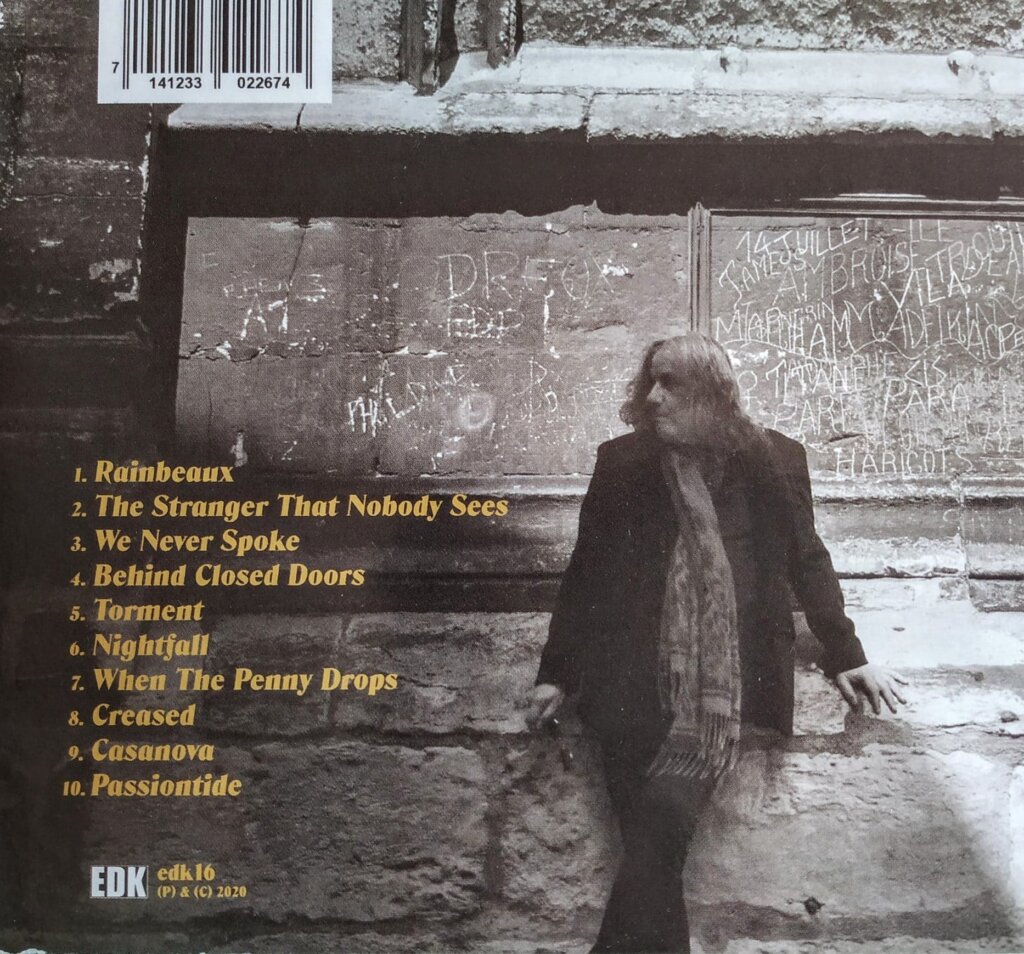 Passiontide : back cover photo by S.Lefebvre

For those of us who appreciate evocative album covers, photos of our favourite artistes and clearly printed lyric sheets, the booklet which accompanies the CD version of ‘Passiontide’ ticks all these boxes nicely. A special mention then for Stéphanie Lefebvre’s photos of Johan and to Pascal Blua for the elegant design of the packaging and booklet.

The opening track of ‘Passiontide’, entitled ‘Rainbeaux’, sets the scene for one of Johan’s many passions, movie stars of yesteryear and the perils of “The Boulevard of Broken Dreams”. This song is a tribute to the late Cheryl “Rainbeaux” Smith, a B-Movie actress who acquired her nickname from the Los Angeles club which she frequented :

“The story unfolds and the plot is thin, your angelic face frozen in a blur”

A black and white photograph, perfectly capturing the ethereal beauty of Ms Rainbeaux, accompanies the lyrics to the song. The musical arrangement features electric guitars, violin, and a regular, insistent drum beat. A simple, almost innocent sounding chorus contrasts with the air of dark foreboding in the verses. It’s an enticing start to the album. 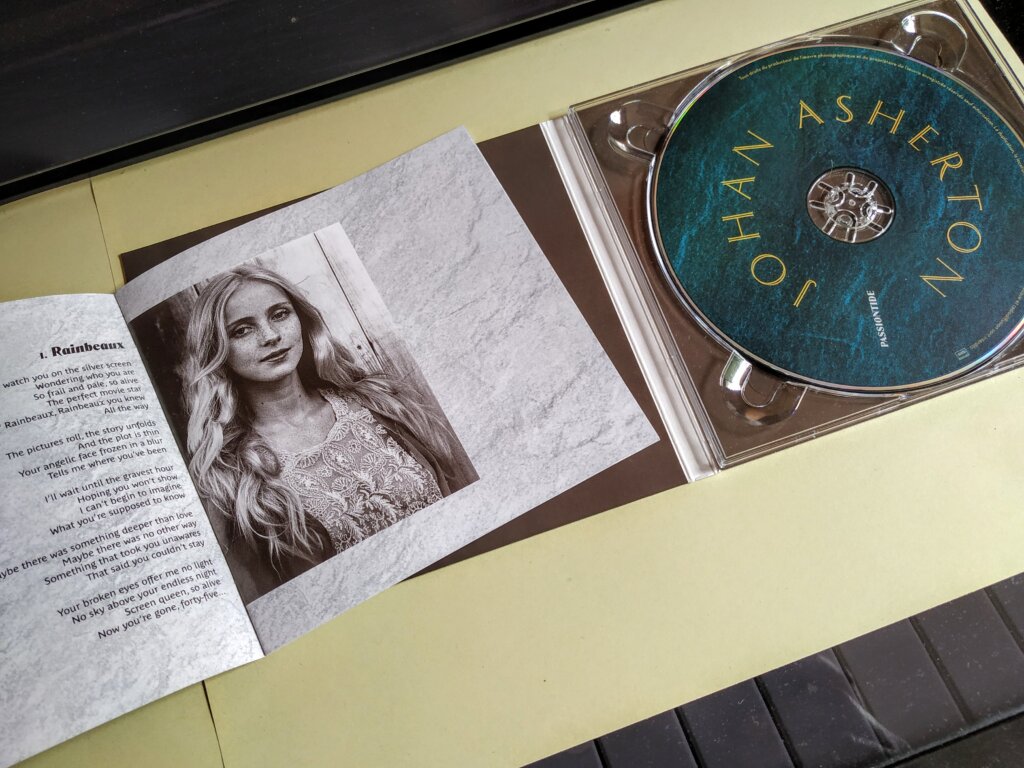 Rainbeaux, the opening song from the album Passiontide

The folk-pop genre, with a hint of Americana, is well represented on ‘Passiontide’. The upbeat radio-friendly pop of ‘We Never Spoke’ (track 3) reminded me of 1980s/1990s tunes by R.E.M. and my only criticism of ‘We Never Spoke’ is that I wish it went on longer, it’s so catchy ! Meanwhile ’The Stranger That Nobody Sees’ (track 2) has a very pleasing melody and a classic eight-line verse/four-line chorus structure. There’s definitely a hint of mischief in the air here as Johan is beguiled by a mysterious stranger:

“But If you’d only reconsider me, you’d find me on my knees.” Prancing horses indeed !

After all that jumping around, the simple piano/vocal arrangement of ‘Behind Closed Doors’ is a great showcase for Johan’s voice and his ability to conjure up an atmosphere with carefully chosen words. The story is not explicit, the listener is free to interpret the lyrics and situation as they wish. Gene Clarksville performs a hauntingly beautiful piano melody on this track.

I suppose if this CD was released on vinyl then the ever so slightly angry rock’n’roll of ‘Torment’ (track 5) would close side one. Johan has used a similar tune to ‘Lonely Feeling’, an upbeat song from the previously mentioned ‘Johan Asherton’s Diamonds’ album. The rhythm section of Loīc Kohler (bass) and Cédric David (drums) do a great job on ‘Torment’. The lyrics are somewhat unusual in places:

Well goodness me ! I started racking my brains to see if I might be the guilty culprit, but fortunately most of my communications with Johan are via Facebook Messenger. Phew!
Can you hear my huge sigh of relief ?!!

This brings us to the second half of ‘Passiontide’ and a set of more contemplative songs, beginning with ‘Nightfall’ an “almost lullaby” sung by Johan to a mysterious, errant lover. The music flows beautifully, each verse adds another level to the story, the chorus is hypnotic. Sébastian Tricart has produced an elegant short film (available via YouTube) to illustrate this song. The video features Johan in an acting rôle with his friend and muse, Primael Moreau:

“One by one the shadows around my heart fly out into the cold”.

They certainly do, while Johan, always the professional, doesn’t bat an eyelid. 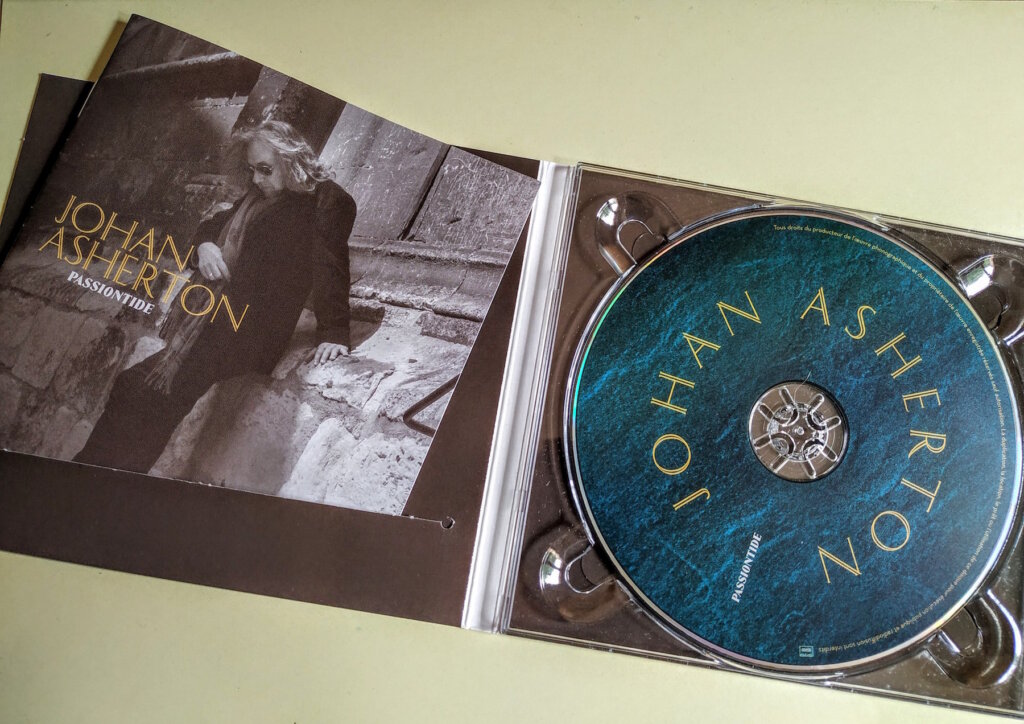 ‘When The Penny Drops’ (track 7) is an enigmatic little number; five verses, no chorus. The song is built around the words in the title, a traditional British phrase which means a sudden realisation or revelation. Johan enjoys such colloquial expressions and they appear in a number of his songs. Is this song autobiographical ? What about all those secrets that we keep carefully tucked away? When do we choose to reveal them ? The Hammond organ adds an extra layer of mystery as do the flourishes of steel guitar.

I knew just by glancing at the lyric sheet that ‘Creased’ (track 8) was going to be very special. Johan himself recently selected the following phrase from ‘Creased’ to serve as a kind of subtitle to the album:

“Some men are made full of regrets, most are made of pain”

I love the way that Johan begins each verse as a spoken poem in his incredibly deep speaking voice and on the fifth line he slips into song with his equally deep singing voice!

I sense echoes of Leonard Cohen in Johan’s vocals and also Lou Reed’s’ epic ‘Coney Island Baby’ in the musical arrangement. This evergreen story of a lover escaping from a romance which has run its course is narrated over an almost ambient violophone backing track (Frédérick Jouhannet) and enhanced by the aptly named Alice Bassié’s excellent double bass playing.

The penultimate track of the album, playfully titled ‘Casanova’, follows on beautifully with its Spanish-style guitars, haunting electric guitar, Spanish beats and percussion. The layering of instruments and vocals on this track is superb. Congratulations to Thierry Minot who mastered this track and the rest of the album, the sound is magnificent throughout. I can imagine Johan’s lips twitching with an amused smile as I suggest that the title ‘Casanova’, a name synonymous with a certain 18th century Italian libertine and raconteur, might be somewhat ironic. Although it could simply refer to a “new house” if one makes a direct translation! 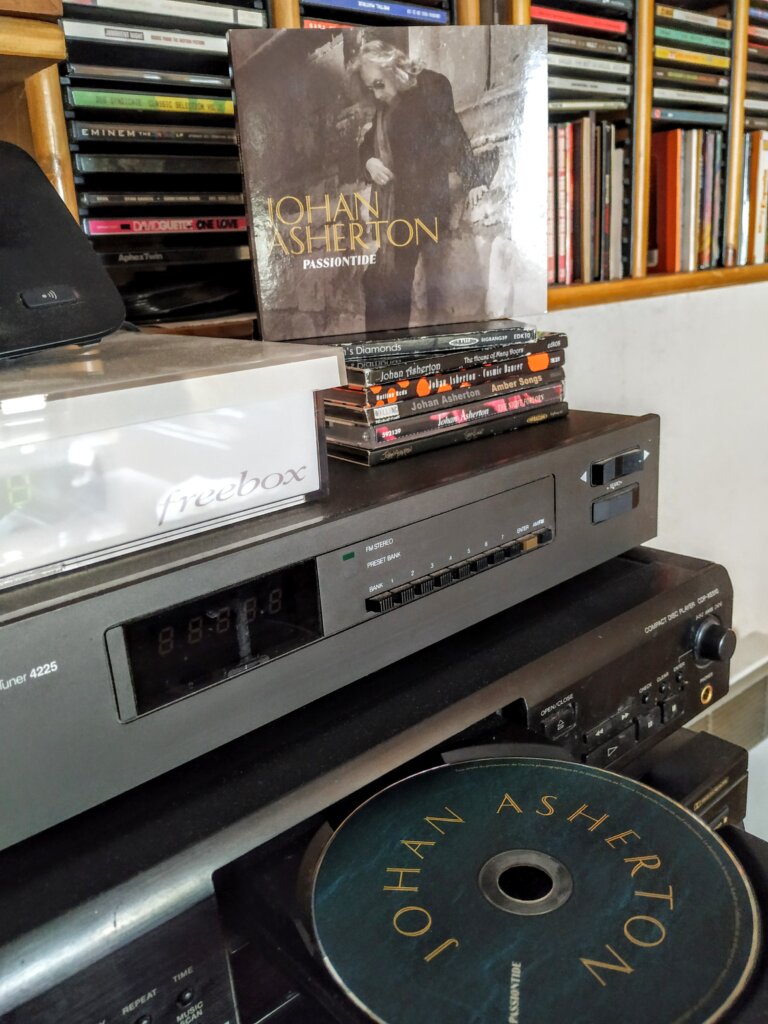 Passiontide by Johan Asherton, plus some of his previous albums

So, the theme of Johan Asherton’s 2020 album ‘Passiontide’ is indeed passion, but in more than one sense. In the Christian church calendar Passiontide is the name given to the last two weeks of Lent which lead up to the Easter festival. It’s a time of contemplation before the Easter feast. In this collection Johan gives us songs that comment on earthly passion(s), perhaps a wave of passion or the ebb and flow of passion. But passion can also mean suffering, as in The Passion of Christ, or a commitment to faith. In a life lived to the full there are always regrets too, naturally.

The final track on the album, also the title track, describes the universal passion of searching for the ultimate answers, for the love that never grows cold and for a faith that will sustain us throughout the years. It is set to a musical arrangement which begins with Johan’s voice accompanied by classical piano (Gene Clarksville) and gradually becomes augmented by double bass, keyboards and subtle percussion:

“And as you were ready to go
You reminded me of
What they call the leap of faith
Perhaps an act of love.”

‘Passiontide’ is a beautiful album and I heartily recommend that you get to know it for yourself. 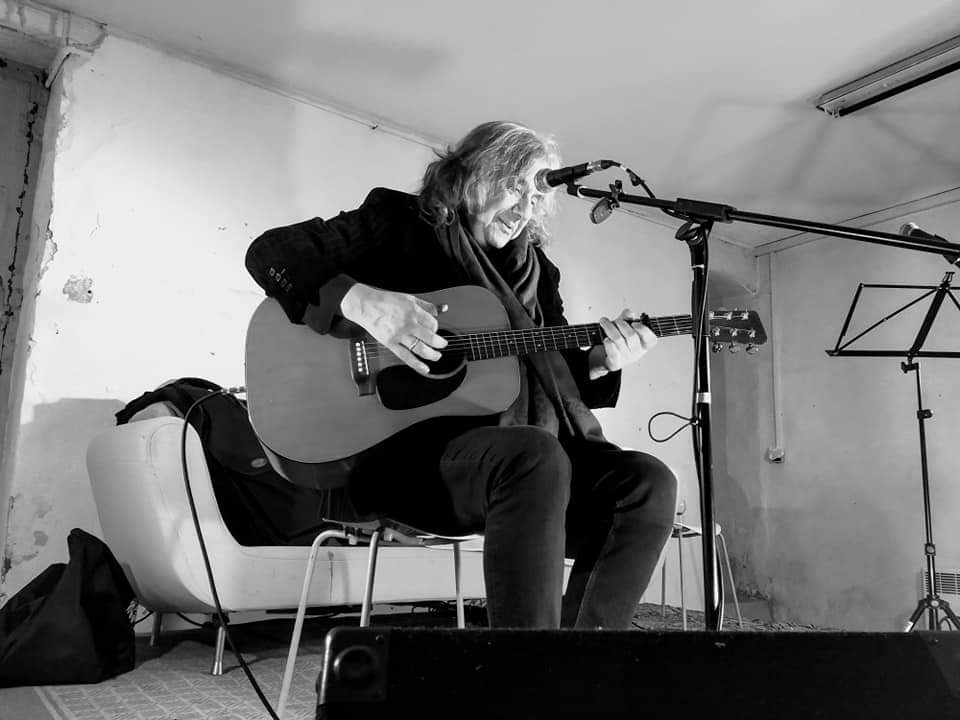