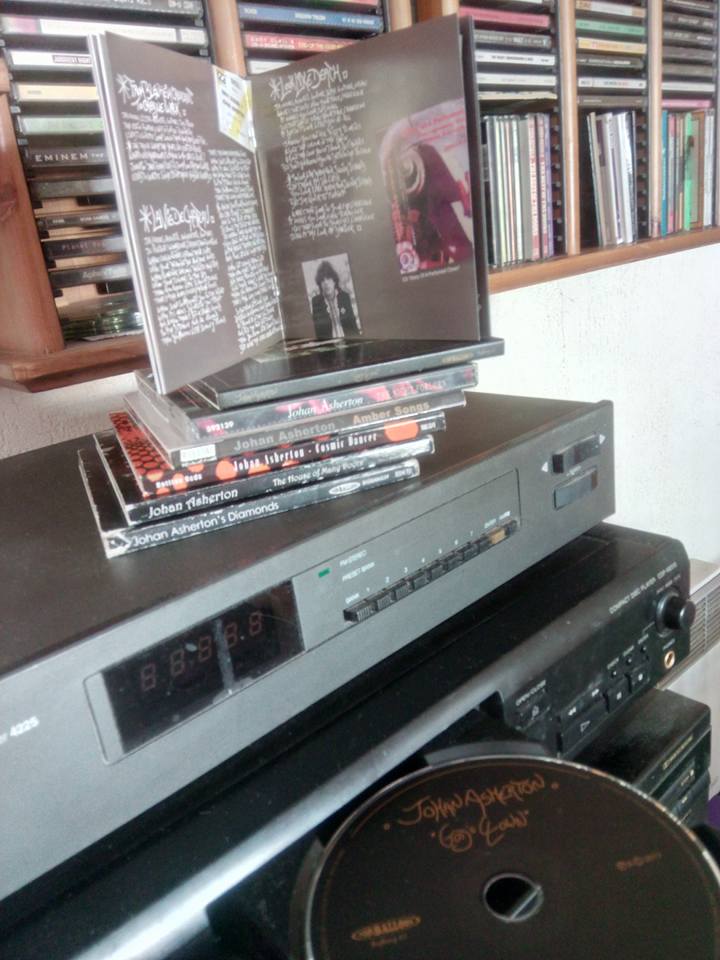 Before we start, a word of warning; this won’t be an ordinary review because there is nothing “ordinary” about the picturesque and romantic universe of Johan Asherton. His first solo project, ‘God’s Clown’, originally released in 1988, is an album of exceptional beauty. Johan Asherton is French, Parisian by birth and upbringing, but he always writes and performs his songs in English.

‘God’s Clown’ is dedicated to the Russian ballet genius, Vaslav Nijinsky, (b. 1889/1890, d.1950) a bright, burning talent who “lived to dance”. When Nijinsky tried to break away from traditional ballet choreography and the controlling influence of Sergei Diaghilev, his career went into free-fall. Nijinsky began to suffer from schizophrenia and tragically spent the last thirty years of his life in various asylums.

So, in this age of YouTube and “downloading” what makes owning a physical album or CD so special and desirable?

One answer, which the album ‘God’s Clown’ demonstrates perfectly, is that you hear the tracks in the order that the artist wanted you to, with the lyrics and sleeve-notes to enhance your experience.  The first two songs, the bright and breezy ‘From Blenheim Crescent to Cheyne Walk’ and the smashed mirror fairy-tale ‘La Vie De Château’ are delightful appetisers. We are then seduced by a trio of atmospheric tracks which really hold the attention; the haunting ‘Look Like Death (Song To Charlene)’, the magnificent ode to Nijinsky, ‘God’s Clown’ and the mysterious ‘Phantom’ inspired by the character of Erik in Gaston Leroux’s novel ‘The Phantom of the Opera’. The blending of Johan’s voice with the music of these tracks is outstanding.

The songs that follow have an autobiographical feel; their lyrics explore the themes of young love and travelling to find your place in the world (‘A Gift From Above’ and ‘Across The Corridors Of Glass’). ‘Touch The Leper’ is a revealing and confessional song, in which Johan casts himself as an outsider, physically and mentally separated from other people. The penultimate song of the original album is a real “rocker” – ‘Sally Was No Angel’, (more about that one later!)

The final track on the original ‘God’s Clown’ album, ‘I Love The Rain’, deserves a special mention, because it’s here, in this gentle, unassuming song that Johan Asherton, poet and storyteller, entices us further into his world and leaves us wanting more. Verse by verse he develops the theme of “the rain” to include the smell of the wet ground, the weeping trees and the falling leaves. True poets and artists have the ability to open our eyes to the magic in the humblest of things. The delicate touches of percussion and the sample of falling rain enhance the mood even further. 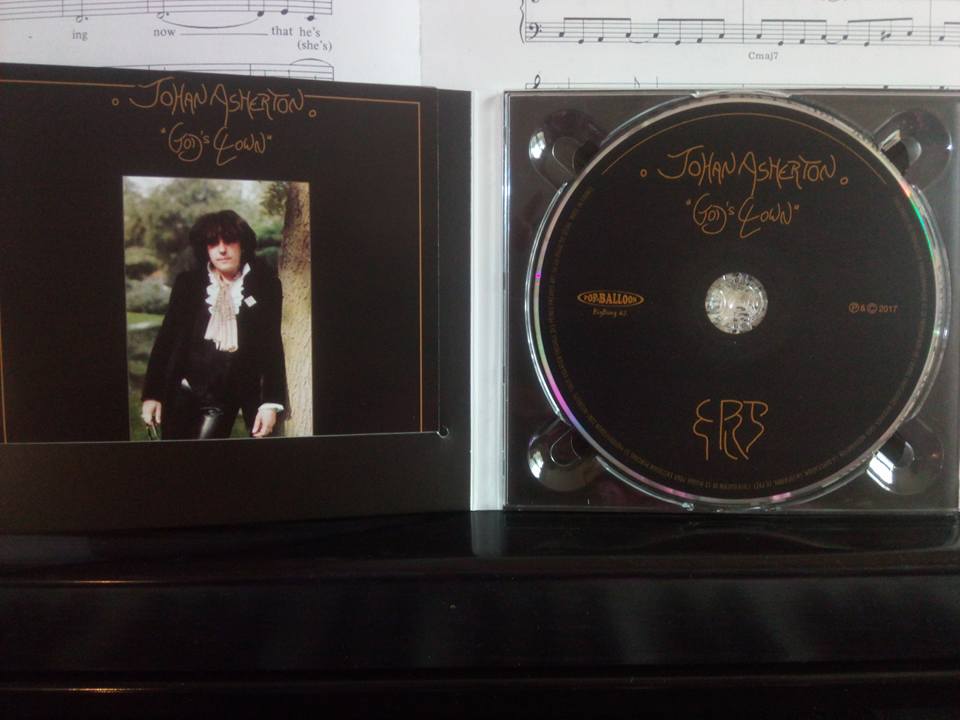 The 2017 re-issue of ‘God’s Clown’ has been beautifully re-mastered by its original producer, Patrick Chevalot, working with André Perriat.  The CD also includes live versions of ‘Look Like Death (Song To Charlene)’, ‘A Gift From Above’ and ‘The Garden Party’ (the studio version finally appeared on Johan’s 1992 album ‘The Night Forlorn’) recorded at Radio Lille, with Johan and J-C Poligot in duo format.  These “stripped back” versions have their own charm, and give an insight into the song-writing process and Johan’s skill as a live performer.  Who can fail to be enchanted by the boyish young musician singing the beautiful lyrics of ‘A Gift From Above’ with only his acoustic guitar as accompaniment?

And when the morning comes and finds us asleep/She whispers words too rare only for me to keep.”

Of course the full studio version, with tubular bells and accordion, is excellent too. The bonus tracks also include a cover version of Marc Bolan’s ‘The Visit’ and alternative studio versions of five songs from ‘God’s Clown’. During various plays of the new, expanded edition of ‘God’s Clown’ I found it interesting to listen to the additional tracks first and then return to the album itself, to appreciate how the final mixes were developed and chosen.

Johan Asherton’s friendship and collaboration with studio maestro and producer Patrick Chevalot has to be mentioned here. By the late 1980s the two musicians had already worked together on albums by Johan’s previous bands, The Froggies and The Liquid Gang. According to the in-depth sleeve-notes which accompany the ‘God’s Clown’ 2017 re-issue, Johan originally intended to record the songs on the album with just his voice and an acoustic guitar. It was Patrick’s gentle suggestion to add electric guitars and orchestral arrangements which took the album beyond “singer-songwriter-with-guitar” territory.

This happy experimentation with multi-track vocals, reverb, strings, AKAI sampler (and nicely played xylophone) is evident from the first track onwards, ‘From Blenheim Crescent to Cheyne Walk’. Johan’s mournful slide guitar on ‘Look Like Death (Song To Charlene)’ adds a hint of Americana, reminiscent of 1980s film soundtracks by Ry Cooder and Hans Zimmer. The stunning title track, ‘God’s Clown’ is given the full orchestral treatment with strings, tympani and a choral backing. By the time we reach track 6, ‘Touch The Leper’, there are even bagpipes and a marching band!

I read in the sleeve-notes that the talented Monsieur Asherton, in the guise of Nicholas Van Der Noot, composed and performed all the keyboard parts on the album, as well as orchestrating “strings and choir”. ‘God’s Clown’ is a worthy monument to the musicality and creativity of the evergreen Asherton/ Chevalot collaboration. 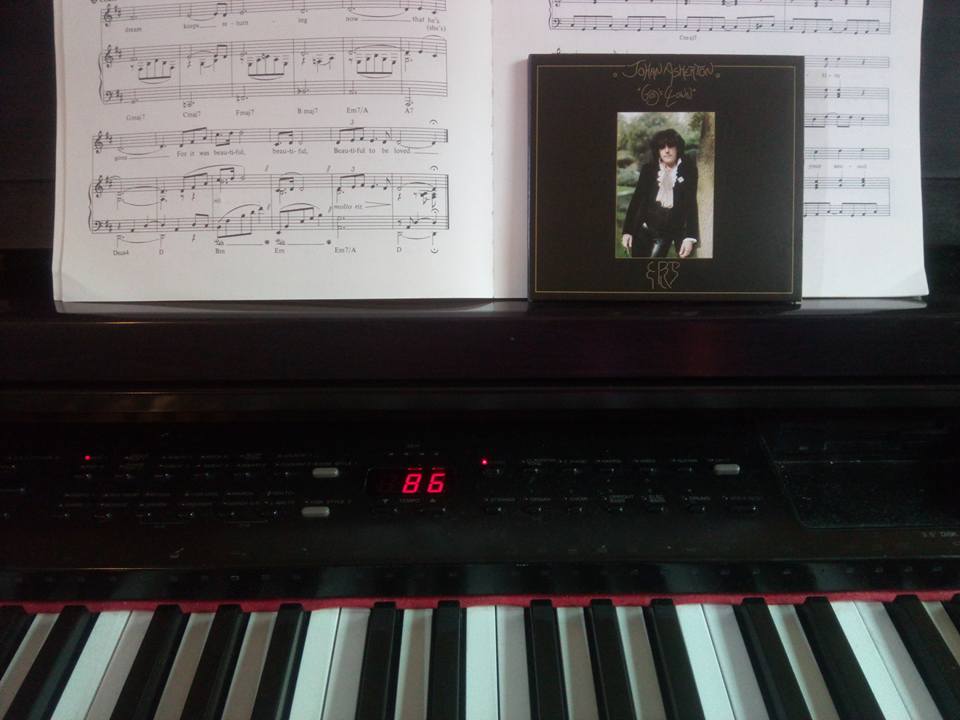 So…if you are accustomed to Johan Asherton’s mature voice and sentiments, will you enjoy the younger version?

Categorically, yes. It is fascinating to hear him trying out different vocal approaches; Bolanesque on the opening track ‘From Blenheim Crescent To Cheyne Walk’; a little Lou Reedian for ‘Look Like Death (Song to Charlene)’; vulnerable, and nearly broken, on the title track ‘God’s Clown’; masterful and poetic, like a French Jim Morrison on ‘Phantom’ and Dylanesque as he recounts his adventures ‘Across The Corridors of Glass’. How I adore those high notes at the beginning of ‘Touch The Leper’ (yes folks… high notes!) Maybe Johan is most simply himself during the songs ‘A Gift From Above’ and ‘I Love The Rain’?

Moreover, Johan Asherton can write and deliver a great pop song when he wants to. The track ‘Sally Was No Angel’ (a witty reply to Marc Bolan’s tune ‘Sally Was An Angel’) incorporates hints of rockabilly and Blue Oyster Cult’s, ‘Don’t Fear The Reaper’.

“Sally was no angel/ Looking for hearts to mangle/ Used to eat them on a plate/Sally was my steady date”.

With Johan playing bass and with percussionist par excellence, J-C Poligot, on the skins, this tune could have been ‘Top of The Pops’!!

The diversity of Johan Asherton’s cultural references makes ‘God’s Clown’ a fascinating album. I have recently been “googling” Vaslav Nijinsky, Sergei Diaghilev and the Ballets Russes as well as ‘La Vie de Château’ (film), ‘The Phantom of the Opera’ (book/musical/ film) and that’s just for starters! Johan loves to share his enthusiasms with friends and fans. “Have you read this book/seen this film/ heard this album ..?” is a frequent conversation opener from “L’Asherton”.

‘God’s Clown’2017, re-visited and re-mastered, feels like the perfect spring /summer album to me, with its bright guitar sounds and beautiful melodies. Even the darker moments seem like distant memories of warm Parisian evenings. Play this album in the morning for inspiration as you start your daily routine, enjoy it in the afternoon with a refreshing tasse de thé or relax with it after dark, sipping a glass of ruby red wine…

“Remember, it’s the work of a young man…” Johan said to me recently, when we were discussing the re-release of ‘God’s Clown’. He also added “It’s funny to think this is where I was 30 years ago”.

What a gift he has given to his fans with this re-issue!