‘Sunflower Garden’ is probably one of my most ambitious watercolours to date. It shows the view from the bottom of my garden looking across the allotments belonging to our neighbours. In the background you can just see part of the houses in the Rue des Beignets. Each year we are charmed by the sunflowers that our neighbour grows. Sometimes they seem to appear overnight.

Ever since August 16th 2013, when I heard Galen Ayers recount the story of her musician father, Kevin, stopping his car in the south of France to collect armfuls of sunflowers, these beautiful flowers have taken on a new significance. Sunflowers are wonderful things to draw and paint, whether they are growing in a garden or placed in a vase. 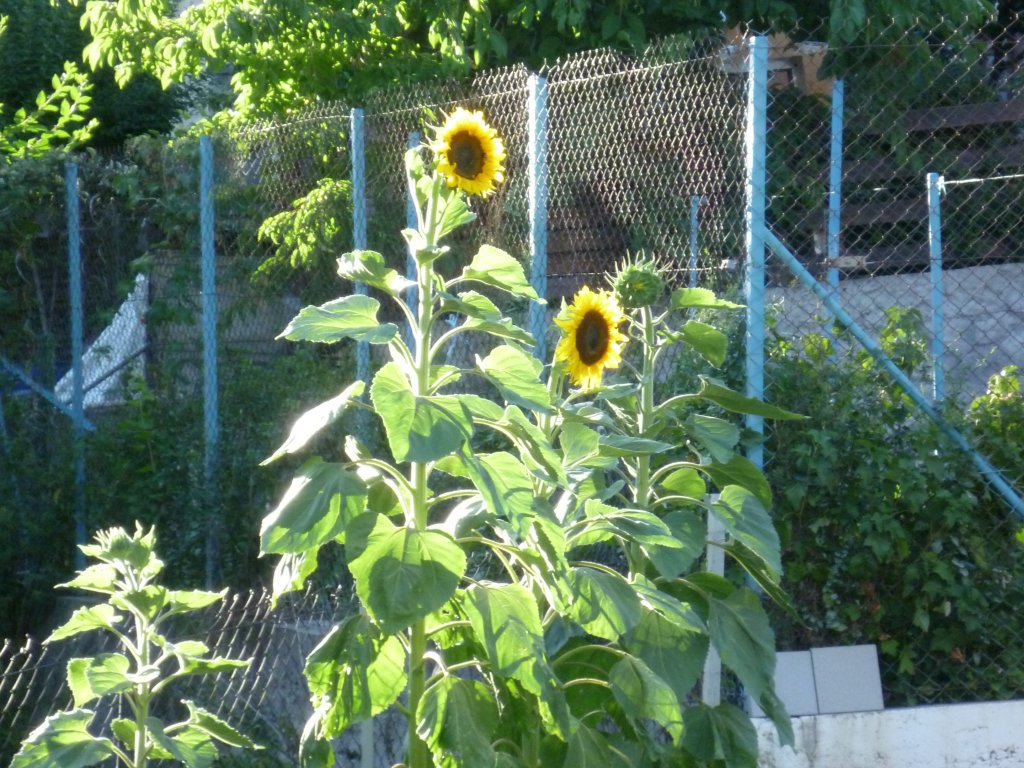 In the late summer of 2014 we christened our neighbour’s sunflowers Kevin, Archie and Ollie in memory of Mr Ayers and his musician friends, all sadly gone to “The Great Gig in the Sky”. Kevin Ayers used to tell his daughter that a field of sunflowers turning to look at the sun was like an audience of fans stretching to look at their favourite rock star!

However, as the painting progressed, a friend of mine happened to post a picture of a field of wilting sunflowers which looked to me like an army of sad, tired mothers. Suddenly my sunflowers took on a feminine, protective, motherly quality, especially the one at the bottom left of my painting.

Meanwhile in England my own mother was losing her battle with dementia and was admitted to a care home. We made a last visit to see her in Autumn 2014 and I finished this painting two weeks later.

‘Sunflower Garden’ really is a magical picture, which took on its own life in front of my very eyes! I’ve only touched on some of the symbolism in the painting. For me it’s about life, death, home, family and also the unknown. It’s the first time I’ve tried to portray both my daughters in a painting – sometimes the priorities of parenthood overwhelm my creative instincts but in this case everything came together nicely! I like to think that the Pre-Raphaelite artists, such as Rossetti, Hunt and Millais would be pleased with my efforts…