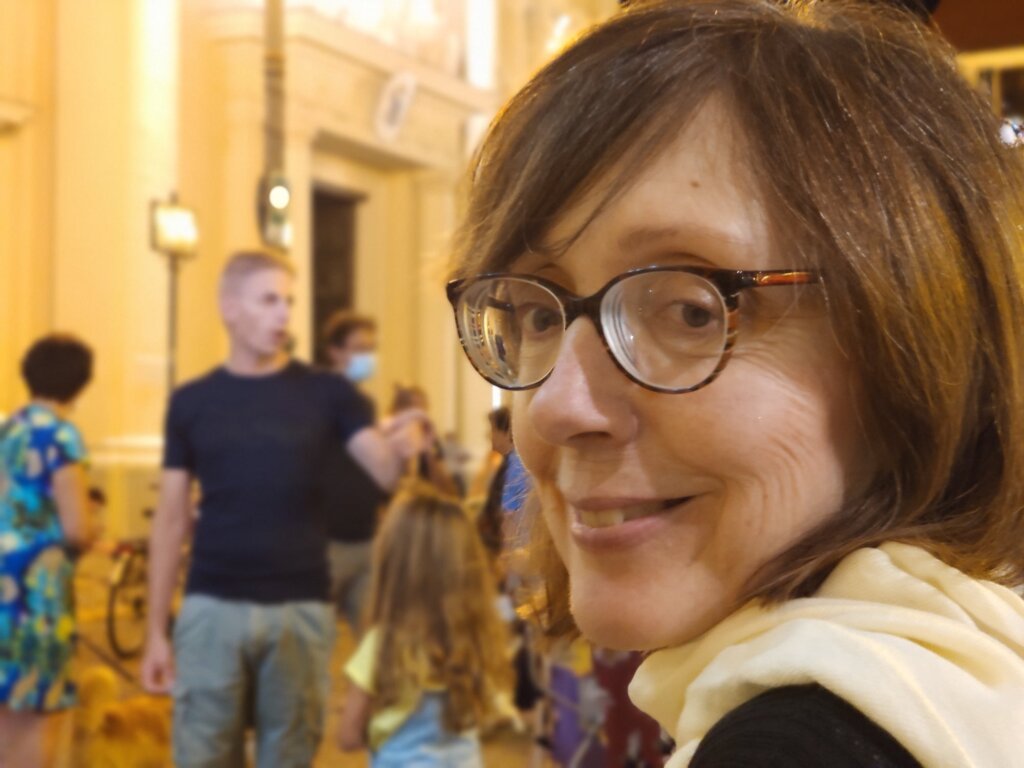 After nearly five years of battling cancer, Susan died on Tuesday March 16th, 2021. Her family continues with her husband Rick, daughters Maddy and Rosie and her brothers Peter and David.

Susan’s obituary in The Harrow Times is here, many thanks to Diana Choulerton for sorting that out for me.

Susan’s funeral was at 10am, Saturday March 27th 2021 at
Crématorium des Alpes du Sud, Allée du Cimetière Saint Roch, 05000 Gap. The number of friends who made their way to the service was wonderful.

The day started out worryingly wet after heavy rain during the night. This didn’t last long, by the time we all arrived in Gap we had a gorgeous blue sky and spring temperatures.

I made seven videos to be played during the service that included photos and artwork by Susan. The music included songs that Susan loved and also a recording of Susan singing S.O.S. by Abba.

Entrée dans la salle: Van Morrison’s Brown Eyed Girl was a song that I remember Susan requesting a few years ago when she realised things might not go as well as they could. I added many photos spanning the 21 years that I knew her as well as many from her earlier days.

Recueillemement: This is the Leonard Cohen song, Suzanne. She listened to him a lot of the last few years. I concentrated on using images of Susan’s artwork – zooming in on some features of her paintings. Her attention to detail was amazing.

Temps de parole: At this point, our dear friend Maria, daughter Madeline and myself said a few words about Susan. There were two other video contributions, firstly from Diana:

Followed by our friend Rio reading a poem written by Susan.

Geste d’hommage: At this point, everybody went up to the coffin, sprinkled flower petals and wrote messages with marker pens all over the coffin. The music was Blue by Kevin Ayers with just one still photo of Susan. Unfortunately due to YouTube and their copyright laws the soundtrack of this video is not available in American Samoa, Canada, Guam, Northern Mariana Islands, Saint Pierre and Miquelon, United States, United States Minor Outlying Islands and the United States Virgin Islands.

One last Kevin Ayers song was Gemini Child. Once again with just one still photo of Susan

After the funeral, we all drove back up to Briançon where we had a wonderful party to celebrate the life of Susan. The sun shone brightly on a lovely warm afternoon. She would have approved, I’m sure. Many thanks to Emma and Jackson for letting us use their house and garden for this event. Thank you also to everybody who came along, helped with food and drinks. You may leave any messages or comments below. Comments are moderated, so may not appear straight away.

This page is for the World to see the love we have for this amazing lady.

I miss her so much already.